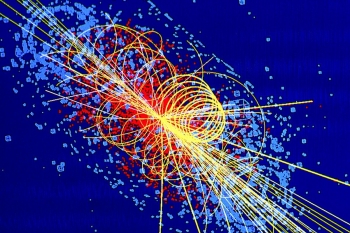 String theory is widely believed to be the best candidate for a unified theory of all the four fundamental forces in nature. Recently, Dr. Biswas along with his collaborator, Dr. Okada, from University of Alabama investigated whether a particular "stringy" feature, "nonlocality", can be detected at the LHC (Large Hadron Collider) run that is currently underway. LHC is the world’s largest and most powerful particle accelerator consisting of a 27-kilometre ring of superconducting magnets with a number of accelerating structures to boost the energy of the particles along the way.

The machine allows us to look into what really goes on at the shortest of distances; it has already discovered the so called "God particle" or the Higg's boson. Nonlocality simply refers to the fact that in string theory the fundamantal "particles", which are no longer point like but rather extended objects like strings, interact not at a single spatial point but rather over a region of space. Although most string theory models suggest that the spatial region of interaction is too small for us to detect, some versions do allow these regions to be large enough that we may just be able to detect them at LHC.

In their paper, which was recently published in Nucl. Phys. B, Dr. Biswas and Dr. Okada, calculated the nonlocal physics signals that LHC might just pick up, if we are lucky!

The abstract of the paper is available here.