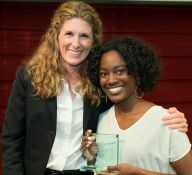 Jazmin Woods (Spanish 2015) received the Outstanding Achievement in Service Learning Award in 2015. The award was presented at the Magis Student Leadership Awards ceremony held at Loyola on Tuesday, April 28, 2015. Jazmin received this honor due to her diligent work at the APEX Youth Center in Fall 2015 as part of her class with Dr. Eileen Doll, SPAN A311, Survey of Spanish Literature II: Technology and Literature.