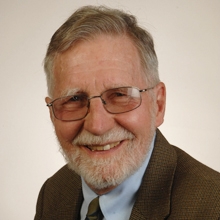 William T. Cotton received his bachelor of arts from Cornell University, M.A.-Ph.D. University of New Mexico, taught English Renaissance, particularly Spenser and Milton, as well as two genres, utopia and epic. A former Associate Professor of English, his publication has been in medieval subjects and in utopia studies. Dr. Cotton directed the English Honors Thesis Program, moderated The Reader's Response, and directed the annual Dawson Galliard Writing Contests. He served as Department Chair, Director of the University Honors Program, and in 1991, was named Dux Academicus. Cotton is a co-founder of New Orleans Fencing Academy, member of New Orleans Badminton Club, and a distance runner who completed four marathons.