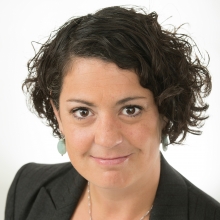 Laura Murphy received her Ph.D. in African and African American Studies at Harvard University in 2008. Her research focuses on historical and modern slavery and postcolonial studies. She is the lead researcher for Loyola's Modern Slavery Research Project. Her book Survivors of Slavery: Modern-Day Slave Narratives (Columbia University Press, 2014) explores human trafficking through the first-person testimony of nearly forty people who have been enslaved in the last twenty years. She is currently working on a book titled The New Slave Narrative, a literary critical analysis of the reemergence of the slave narrative tradition in the late 20th century.  She recently authored a report entitled "Human Trafficking and Exploitative Labor Among Homeless Youth in New Orleans" with Rae Taylor and Christian Bolden.  Her first book, Metaphor and the Slave Trade in West African Literature (Ohio University Press 2012, winner of the African Literature Association First Book Prize), examines the coded ways West African writers have memorialized the trauma of the trans-Atlantic slave trade. Her articles have appeared in Cambridge Journal of Postcolonial Inquiry, Slavery and Abolition, Research in African Literatures, Studies in the Novel, Genre, The Journal of the African Literature Association, College Literature, and the LA Review of Books.