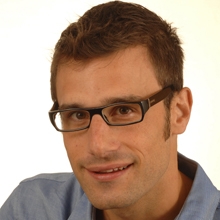 Christopher Schaberg received his Ph.D. from the University of California, Davis, where he specialized in 20th-century American literature and Critical Theory. His research interests include mobility studies (especially airports), ecology and environment, and concepts of place and space.

At Loyola, Dr. Schaberg teaches courses on contemporary literature and nonfiction, cultural studies, and environmental theory. He is the author of The Textual Life of Airports: Reading the Culture of Flight /(Bloomsbury, 2012), and co-editor of Deconstructing Brad Pitt (Bloomsbury, 2014). His book The End of Airports is forthcoming from Bloomsbury in 2015.

Dr. Schaberg is founding co-editor (with Ian Bogost at Georgia Tech) of an essay and book series called Object Lessons, which explores the hidden lives of ordinary things. He writes about his teaching and research on his blog What is Literature? and can also be found on twitter under the handle @airplanereading.