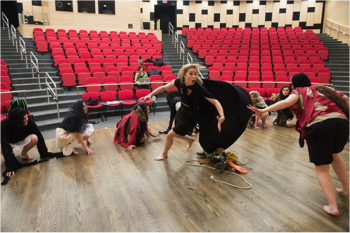 Students in Dr. Hillary Eklund’s course in “Tudor and Stuart Drama” not only read a number of examples of non-Shakespearean Renaissance drama but also explored in depth one of its forms (the court masque) through a workshop production of Ben Jonson’s Masque of Queens. So successful was the performance at Loyola that Professor Eklund was invited to organize a full production of the masque, with the assistance of fellow English professor Dr. John Sebastian and Professor Artemis Preeshl of the Department of Theatre Arts and Dance, for the 2015 Festival of Early Drama in Toronto and for the annual meeting of the Shakespeare Association of America in 2016. Read the full story of how eight female students and their professors explored themes of fame, virtue, and gender issues in performance here.